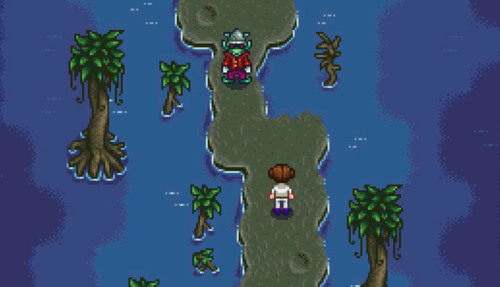 The henchman inside the Witch's Swamp

The questline to access the Witch's Hut involves two quests, which become available after completing the Community Center Bundles or the Joja Community Development Form. The player can trigger a cut scene at the Railroad, where the Wizard will request they find a Dark Talisman, which can be found in a chest within the Mutant Bug Lair. The Mutant Bug Lair can be accessed by speaking to Krobus, who will reveal the entrance in the Sewers. After obtaining the Talisman, bring it back to the Railroad area and place it on the artifact blocking the cave. Inside the cave is a teleportation rune which leads to the Witch's Swamp.

In the Witch's Swamp you can catch Void Salmon and Void Mayonnaise by fishing. There is a 25% chance of catching a Void Mayonnaise while the Henchman is guarding the Witch's Hut. You can also catch Green Algae and White Algae. Catfish can also be caught in the Spring, Summer, and Fall.