The Railroad is located to the north of the Mountain. It becomes accessible after an earthquake occurs on the 3rd of Summer in the first year, clearing the blocked pass. 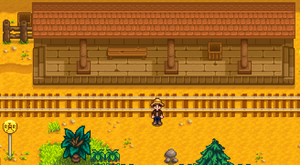 On random days between 9am and 6pm, a train can pass through the area. If the player is outdoors, a message will pop up saying "A train is passing through Stardew Valley" accompanied by a train whistle sound.

While the train cars pass by, items such as Leprechaun Shoes, Stone, Coal, Iron Ore, Wood and Geodes may fall off and be acquired. The player need not be present when the train goes by, but dropped items will disappear overnight, so they must be collected the same day. A player who stands in front of the train as it approaches or attacks the train with certain tools or weapons will suffer minor damage and be knocked back. The train will pass by and drop items even if the game is paused.

There are several different types of trains that can pass by. The most common type of train has cars containing various resources, such as wood, stone, or coal. It may also have a passenger car or have cars with graffiti on the sides.

Other train occurrences can include...

The Train Platform is located north of the tracks. The player can find an empty box there, which is used for the quest "The Mysterious Qi".

In the southwest of the Railroad is the Spa. Standing still when in the pool causes energy and health to be quickly restored.

There's a passage to the Witch's Swamp through the cave north east of the train platform. This cave will be unlocked by completing a series of quests given by the Wizard. A cutscene initiating the quests will start when the player first enters the Railroad area after completing either the Community Center bundles or Joja Community Development Form.

After completing these quests players can use the cave to travel to the Witch's Swamp at anytime.

Users with access to their saved game files may find the "Stardew Predictor" utility helpful for predicting when trains will appear. The utility is located at: https://mouseypounds.github.io/stardew-predictor/